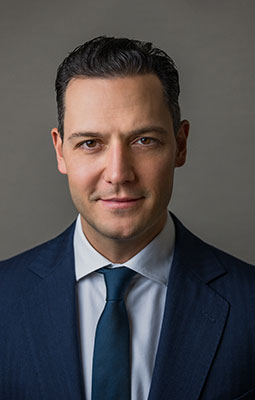 Mo El Husseiny is a leading investor in technology start-ups. He is Managing Partner of Ventura Capital, an investment company focused on pre-IPO consumer and cybersecurity technology opportunities. Mo established Ventura Capital in 2012 to pursue his vision of investing in technological innovations with the power to positively disrupt the technology market and the lives we all lead.

Mo El Husseiny considers himself an intuitive, instinctive investor, driven by trust: the trust he invests in the founders he backs, the trusted team that he has built at Ventura Capital and the trust which he is shown by Ventura’s investors. With their support, Ventura Capital has invested over $1 billion in such technology companies as DELOS, Xiaomi, Paytm, Spotify, Coursera, Alibaba, Twitter, Uber, Lyft, Didi, C8 Technologies, Lookout, The Mobility House, Newstead Capital, Owlstone Medical, QiO, Upgrade and Railsbank. Throughout Ventura Capital has maintained an average exit of 4x capital invested and a Global IRR of 54% across all investments. Mo serves as Board Director of a number of companies among those listed above.

Mo El Husseiny previously worked for eight years at Mubadala, the Abu Dhabi Sovereign Wealth Fund. While there he undertook $15 billion of investments from the Mergers & Acquisitions department, served as Director of Special Projects, spent a year as Chief of Staff to the COO, and ended his service as Vice President responsible for Group Strategy. Mo was also executive board member of Abu Dhabi’s Leadership Development Center, a joint venture with General Electric. Prior to this, Mo worked in London at Goldman Sachs, within the Industrials and Natural Resources Division (IBD).

In 2014 Mo El Husseiny was appointed as a committee member of the Finance Council in Brussels, a committee of EU parliamentarians subordinated to the European Parliamentary Committee on Economic and Monetary Affairs, devoted to progressing and integrating European Banking and Finance Policy. He holds this position as a representative of the private sector.

Mo El Husseiny is proud of his Lebanese and Scottish heritage, as well as the friendships and connections he has made around the world. He is an Honorary Fellow of the Royal Albert Hall and a Trustee of the Royal Albert Hall Trust. He is Socio de Honor of the Royal Sailing Club of Spain, is a board member of the Club and is a Trustee of the Club’s Centre of the Disabled, which provides sailing for young people with disabilities. He lives in London with his wife, Zoe, and their two young daughters.